The three-time Academy Award winner has written and directed over 20 feature films, including some of the most influential and iconic films of recent decades, among them “Platoon” (1986) “Natural Born Killers” (1994) or “Snowden” (2016). 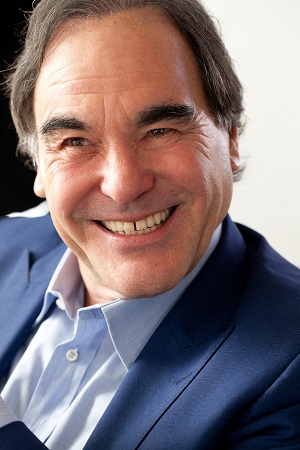 As a documentary filmmaker, Stone also regularly initiates debates on global political issues. For example, he portrayed Fidel Castro in three documentaries (including “Commandante”, 2003). He examined Israel-Palestine relations (“Persona Non Grata”, 2003) and conducted a four-part conversation with Russian President Vladimir Putin. For the series “South of the Border” (2009) he interviewed Hugo Chavez and seven other presidents of South American countries; in the ten-part documentary “The Untold History of the United States” (2012), he reinterprets American history. His most recent work, “JFK Revisited: Through the Looking Glass”, premiered in July 2021.

“Oliver Stone has written film history and has repeatedly taken a smart and stimulating stand on the issues that greatly affect humanity, such as war, violence, power, terror, and surveillance. Stone represents the B3’s claim to combine the highest artistic quality with socio-political relevance in the best possible manner”, says B3 Artistic Director, Prof. Bernd Kracke with regard to the festival’s decision.

The award ceremony will take place via livestream during the B3 opening event on October 15 in Frankfurt, at ASTOR Film Lounge MyZeil.

Oliver Stone will talk as well in a fireside chat about his creativity, his oeuvre and his view on the world right now on Tuesday, October 20, 2021.

Since 2013, the B3 Biennial of the Moving Image has been honoring established artists as well as emerging talents with the internationally acclaimed BEN Awards. Works by B3 Biennial participants that deal with new narrative techniques in a particularly innovative way enter the competition for the main and emerging talent awards. The award was designed by South African artist Trevor Gould. Previous main award winners are Laurie Anderson (2013), Brian Eno (2015), Jonas Mekas & Ingvild Goetz (2017) Steve McQueen (2019) and in 2020 Willem Dafoe and Anne Imhof.

As a cross-media, cross-genre and international moving image festival offering film screenings, exhibitions, conference and workshop programs as well as various competition formats, B3 addresses the discourse on all trends and developments pertaining to the moving image in the areas of film, art, games and VR/XR. The aim of the Biennial, which was launched in 2012, is on the one hand to create a broad interdisciplinary alliance for the moving image, and on the other hand to offer the international cultural and creative industries a comprehensive platform for innovation and exchange. The B3 Biennial of the Moving Image is organized by the Offenbach School of Design (HfG) and funded by the Hessian Ministry of Science and Art (HMWK). Kulturfonds Frankfurt RheinMain and Wirtschaftsförderung Frankfurt are main sponsors. Strategic partners include the Frankfurt Book Fair, THE ARTS+ and Film London.